Many of us have heard that having an efficient home can cut down on energy costs, and after half a decade as a homeowner looking into ways to cut expenses, I’ve learned that energy-saving ideas are a great way to save money on monthly expenses.

However, the upfront cost of many energy-efficient renovations is expensive – like, take-a-loan-from-the-bank expensive.  They claim they will pay themselves back over a twenty-year period but it always seems to end up on the bottom of the to-do list. With my front steps crumbling, the roof growing moss and the laundry machine making plaintive sounds at me every spin cycle there just always seems to be something else that needs fixing first. Energy efficiency seems great, but I had always written it off as a kind of “the rich get richer” type of savings.

When I started hearing about solar energy I didn’t think much about it. Sure, I figured it’s good for the environment and I’m sure in 20 years I’ll be saving, but I don’t have thirty grand to put into something that’s not going to watch my kids or do my dishes.

It took some persuasion from a friend but I eventually caved and called a company that serves my area called EnergyPal after a recommendation to see what the fuss was about.

My initial worry was that I was going to be sold on the promise of long term investment – so I started off (pretty bluntly) that I probably wasn’t a great candidate for solar because I don’t have capital lying around to put into this, and the rep I spoke with said that’s pretty standard, and most people who go solar are usually doing it to save money on monthly expenses.

They got some information from me (they already had my address and Utility company, but they asked to see my bill and talked about my house and my 5 and 10-year plans for the home). They showed me some options that were no money down – both a renting type option (a lease) and a loan option (I looked at a ten, twenty, and twenty-five-year loan).

This was my experience:

First of all, there were some caveats. They were pretty straightforward with me that in my case panels would work the best on the front of my house, which faces south and therefore got the most sun. Anywhere else on my roof meant I would get less sun and need more panels to get the same amount of electricity, which would drive up the cost. The panels they showed me (all online) looked pretty nice, and at the end of the day if it will save me the money you can put one of those wacky waving inflatable arm-waving tube men on the front of my house. 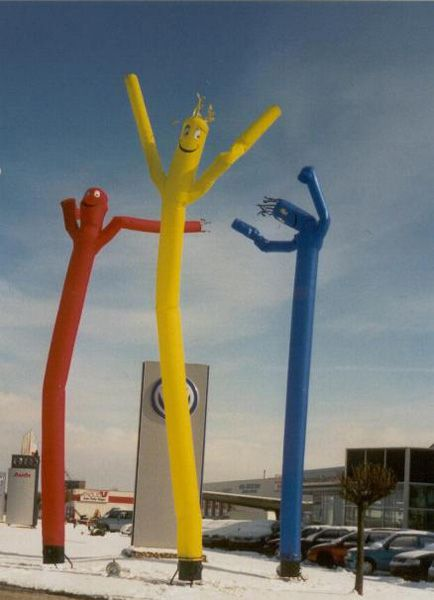 Instead of a tube man, these are the panels I chose:

My rep showed me four or five different panel options so we could compare prices. We ended up going with these ones because REC is high quality and they perform really well in the heat (I’m in southern CA). They were the best price other than a slightly less efficient panel, but I would have needed an extra panel in that case so the overall price was almost the same. These panels are supposed to last longer (online it looks like 30-35 years) and I plan on being in this house for a while so it seemed like the best decision for me.


The next caveat was that my roof had to be in decent condition – not the shingles (which are not great but not a deal-breaker) but the supports underneath. They wouldn’t be able to find that out until later in the process and they assured me that in the case of the roof NOT being able to support solar I could back out with no money lost.

I also learned that the cost to remove the panels, change the shingles, and re-install the panels is not that expensive should I need to re-shingle.

While we were talking they were also presenting online their computer screen and showing me my house. After some discussion we went with an arrangement of panels that looked like this: 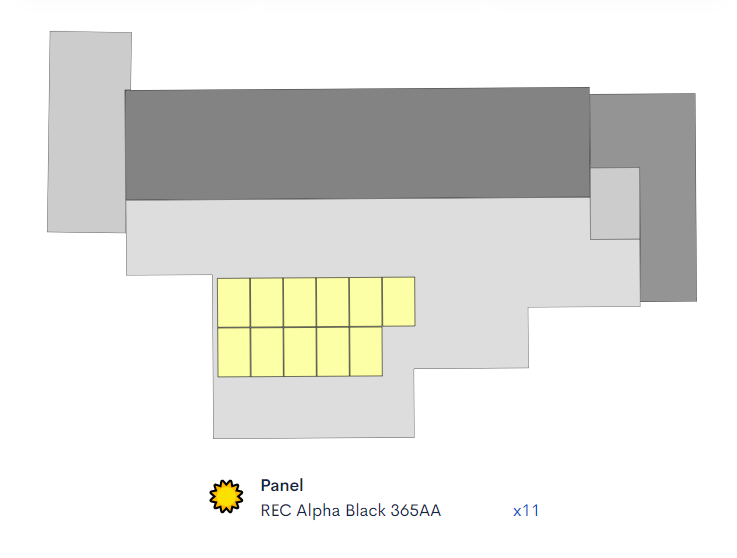 After looking at my Utility bill the rep showed me that 11 panels would cover all my electricity needs for the year. For me, this meant that in the summer I’m making more electricity and getting credits on my Edison bill, and in the winter I’m not generating as much so I might have to pay a small bill, but after doing the math my bill would be cancelled out for the year between credits in the summer and small bills in the winter.

Take a look at my June bill: 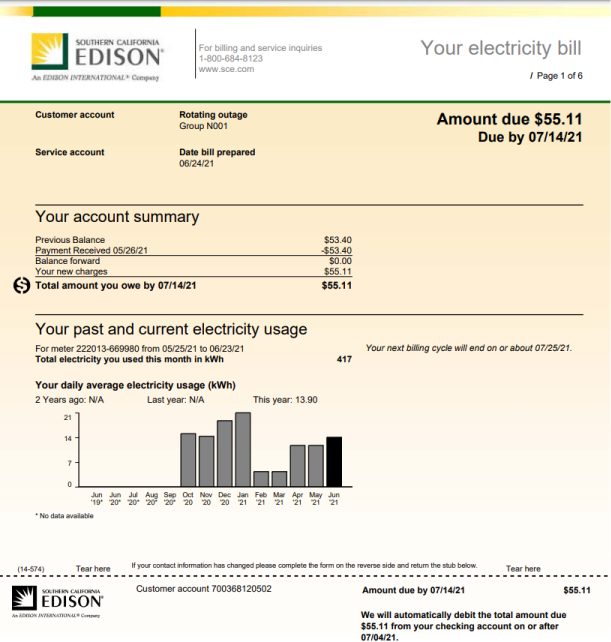 It’s $55 – which is pretty good for a June bill for us (disclaimer, we were actually away for a week and a half in June, but the Rep looked at our yearly use and accounted for this).


Now take a look at my bill after I installed it and the system was running (this is November) it’s a credit of $45. 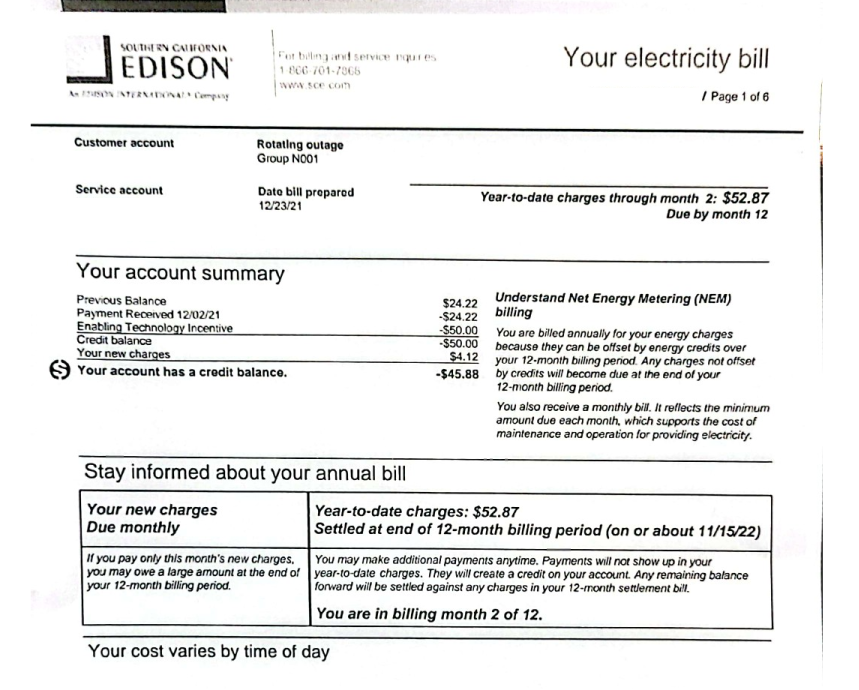 The terms of my loan are $51/monthly for the system (after tax, which was included)

My Utility credit canceled out the whole solar bill and most of my solar payments. Instead of my normal bill of approx. $70, I paid a total of $6 after my solar credit.

Here’s what the panels look like on my actual house (we talked about the trees here too – they could see the height of the trees won’t interfere with my panels yet, but I might have to trim them if they get another 8 or so feet). 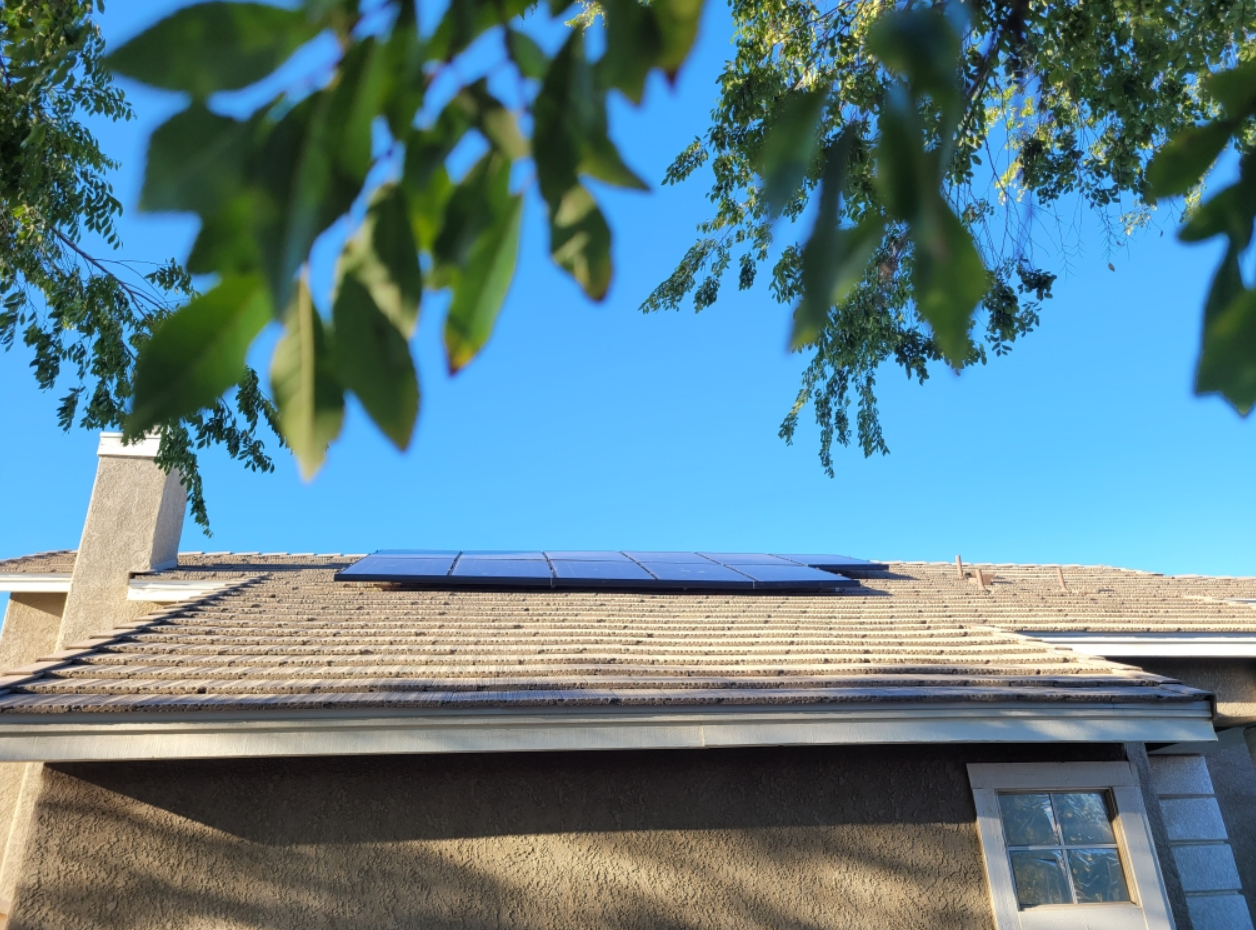 I don’t know if solar is right for everyone. I had to take out a loan (I ended up going with a 0%, 25-year loan) and some people don’t want to do that. There are some non-loan options (paying for everything upfront or renting the system) but for me, I was fine with carrying a loan because once it’s paid off I will own the system and be generating energy for free (and as I said, I picked panels that should work for a long time). Plus there aren’t any restrictions on me paying down the loan early, so I can pay it off quicker if I would like.

All this being said, I don’t know if this is a magic solution for everyone but for me, it really paid off right away. Your roof and what direction your house faces were really important factors, and then after that it was just about how to maximize my savings.

If you are considering going solar I do recommend EnergyPal – they were really helpful in showing me my options and answering my questions (I am still in contact with my rep). If you are interested in seeing if your house is a good candidate and not being forced to sign anything before being able to look at the proposal you can go to the link below:

I hope this was helpful for anyone considering solar! 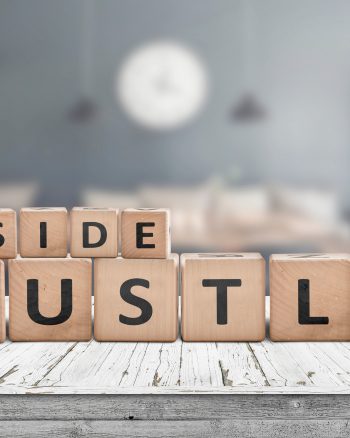